Earlier this month, Porsche AG celebrated the production of its one millionth 911 model.

This is big news for the 24,500 people that work for Porsche, the 15,000 or so Porsche dealer employees, Volkswagen Group (Porsche’s parent), the less-than-a-million current Porsche owners and the multiple millions of people who consider themselves Porschephiles. For the rest of the world, please allow me to put this milestone in perspective.

While it’s true that more than half of current Porsche sales are not sports cars, the 911 is the most expensive sports car model in its line-up. That’s why it took 54 years to reach the 1,000,000 mark. But here’s the thing—very few car models have been around that long, and almost none bear any real resemblance to the original model in look or size  [1]. The video below shows how gradually the 911 model has morphed over its history of 54 years and seven generations.

Porsche makes more per car sold than any other manufacturer and the 911 is the highest margin model. It actually outsells the lower-priced Porsche sports car models.

Surprisingly, only about 10% bigger in wheelbase, length and width.

Not surprisingly, 33% heavier, and safer in terms of crash protection.

223% more horsepower for a 50% increase in 0-100 km/h acceleration and top speed. I’m rounding a bit on the performance gains, which the purist will hate. 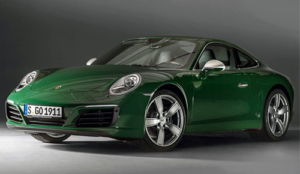 Strange as it may sound, it’s really hard to stick to a good idea, in car making or in marketing. This is even more true in a content-hungry digital world that always wants something new. Porsche made a great sports car in 1963 and they have made it progressively better ever since. 70% to 75% of them are still operational. The 911 was expensive when it was first launched and the market accepted that—and has been willing to pay a tiny bit more, every year for 54 years, so far.

Even if your heart doesn’t race a bit at the sight, sound or thought of a 911, this landmark is truly impressive.