I’m embarrassed to admit I was never a fan of the Seinfeld show, despite the fact that I admire its phenomenal success. For some reason, I never sat through a complete episode. I’m sure if I did, I’d be hooked like most of North America was. Seinfeld was a sit-com about nothing, so I was told, so I avoided it because I assumed the same could be said for the creative force behind it. Depth is clearly not a prerequisite for entertainment industry success.

Fortunately, I was exposed to Jerry Seinfeld in a different way—through a promotional video he did for Porsche in the mid-1990s. The connection is that Seinfeld is a Porschephile, owns more than 40 Porsche models, and therefore enjoys special status with the company. 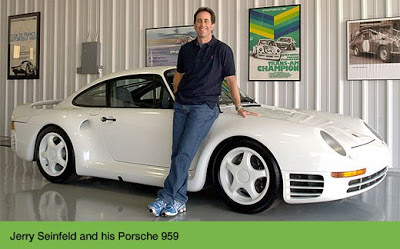 In the video, Seinfeld talks about how good stand-up comedy has density of thought—meaning simple on the surface, but with volumes of thought behind it or with layers of meaning underneath it. He speaks with intelligence and wonderfully-understated passion and makes a graceful segue to the pitch that the new 911 (993 generation) Carrera demonstrates incredible density of thought. Engineering thought, I assume, since the people who run Porsche have never been particularly comical.

Density of thought has always been part of art—“a picture is worth a thousand words”. But in the art world, it gets a bit tricky. I would argue that the viewer does all the work in creating the layers beneath what you see, not the artist. The artist just shows you the doorway.

Poetry is the writing form where density of thought is most obvious. Think Robert Frost, whose innocent little poem “Stopping by Woods on a Snowy Evening” evokes deep emotion and a feeling of familiarity. Sheer brilliance to an outdoor boy, or girl.

Density of thought might be easiest to see in product design. Almost anything Apple makes. Most of what Alessi designs. The Porsche Boxster—in styling and engineering.

I propose that the marketing world could use more density of thought. All too often, what we show clients is incredible lightness of thought. Great copywriting has always been about density ( “Just do it.”  [1] , “Think different.” [2] ), but we need it everywhere. How about a creative brief that really is brief? A positioning statement that focuses on one great thing. A media report that takes less time to read than a complete viewing/reading of every single media property in the plan. Or a marketing recommendation with two or three really good reasons for doing something rather than 10 mediocre ones. Density of thought shows confidence and respect for your audience.

Right about now is when my colleague and friend in the next office quips: “Right—I didn’t have time to write you a short note, so here’s a really long one instead.”

Inspiring density of thought in its own right. And that’s a start.