RE-INTRODUCING THE POWER OF CREATIVE

It’s all too easy to become jaded about the creative side of the marketing business with time, even if you are a creative person. It’s easy to see how this happens:

I am the first to admit that no consumer has ever looked up slack-jawed from his favourite program/magazine/website/twitter feed to say, “Now THAT is a truly brilliant bit of brand strategy.” But I have been one of those jaded with marketing creative. I will even admit that every once in a while working with creative people, I’ve muttered “that ain’t workin” in the Mark Knopfler context. [1] Even though I really did know better.

Then something unexpected happened three summers ago while cottaging on Georgian Bay islands. I had the opportunity to see a presentation by Bill Lishman. It was billed as a discussion of Mr Lishman’s experience in the areas of environmental and energy conservation, with a bit of art thrown in for good measure. The hook was that Lishman is the Canadian whose life inspired the 1996 Oscar-nominated Columbia Pictures film “Fly Away Home”. That’s the story of the ultralight pilot who taught Canada geese to migrate south in winter (a totally new migration path for them) by flying with them as leader of the flock.

The presentation venue was a rickety wooden movie house built sometime in the first half of the 20th century, shuttered dark for the clunky 35mm slide projector inside. 50 people were unnaturally still in their creaky wooden chairs as Lishman described his life experience so far, in excruciatingly understated fashion:

And when Lishman needed money he often turned to art. Often it was commissioned sculpture from his blacksmithy. His sculptures of birds, buffalo, horses and sheep seem to capture the spirit of the animal, despite being wrought simply, sometimes minimally, from metal. They were stunning even as photographic images. 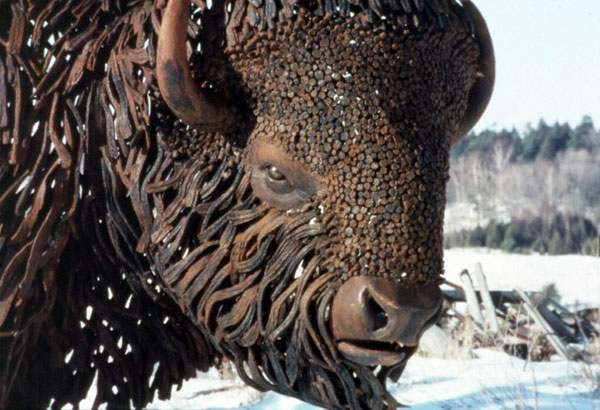 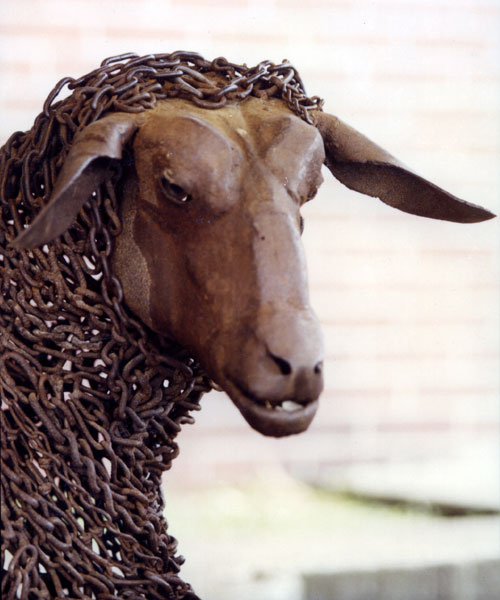 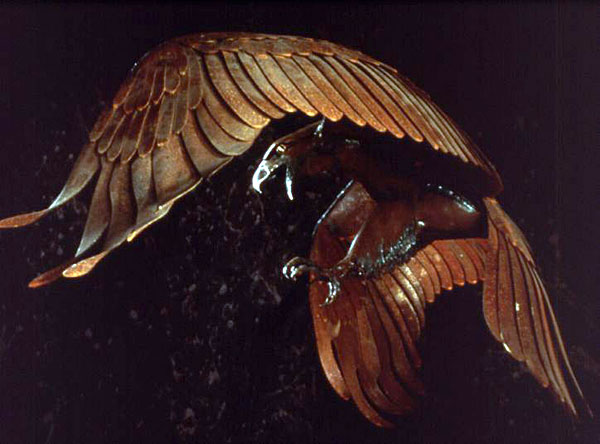 And then (wait for it), this transparency clicked noisily into place in front of the projector’s bright light: [3] 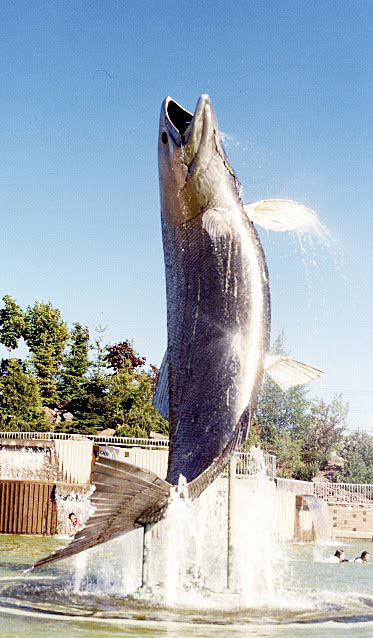 There was a nearly-unanimous collective inward breath. Instantly and inexplicably, I was almost crying. Emotion was swirling in me like a freshly-poured Guinness, and it took almost as long to settle out.

Restigouche Sam is the pride and glory of Campbellton, NB. He’s an 8.5 metre tall fountain sculpture that is perfect in micro and macro detail. Lishman has used running water, positioning and light so that his hunk of stainless steel really does look like a perfect salmon jumping out of water.

There was a lot of context that made this such a powerful imprinted moment for me, including Mr Lishman. [4] There were many distractions available to me that day—summer sun and that sweet-water ocean known as Georgian Bay. But there I was in a dark, stuffy old movie hall with a tear in my eye and a lump in my throat, and loving it, because Lishman’s creativity and energy was (and is) so beautiful. If we can harness even a fraction of that kind of creative power to get people to do something good for themselves or someone else, it will be a very good day. And really, strategy and media are all the context that great marketing creative needs.

Lishman says he learned more about flying from his geese than he ever taught them. No, I’m not buying it.